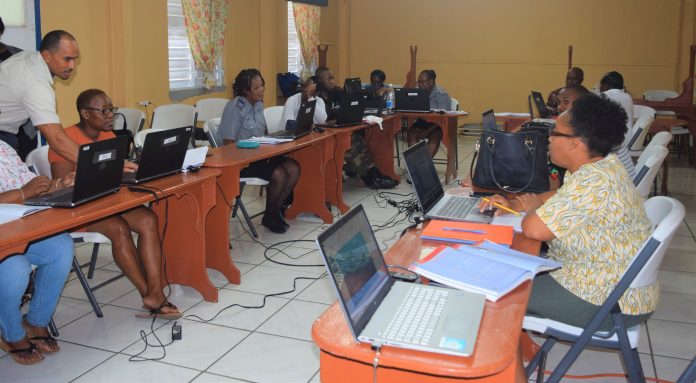 The course, which began Sept 12 and will conclude Oct. 25, has eleven Officers and one Warden enrolled. Sessions are held twice per week and is being facilitated by the Technical Operations Coordinator for the Force, Shirman White

The course covers topics such as parts of the computer, different types of computers, Microsoft Office, as well as online security and safety, White explained. He also disclosed that there are plans to implement intermediate and advanced computer courses in the future, and that upon completion of this session, the course will be offered to civilian staff, as well

“A lot of officers tend to shy away from the computer…It is a part of their job that they use computers on a daily basis so we try to make rounded individuals where it is [not only] for their personal development, but also for the development of the organization,” said White. “This is the basics so we are basically setting the foundation to move on to intermediate and then advance.”

The Police Records Management Information System (PRMIS) was officially launched recently as part of CariSECURE which is a USAID-sponsored project aimed at strengthening evidence-based decision making for citizen security in the Caribbean. PRMIS will assist the Police Force to improve citizen security data management, analysis, and monitoring for crime reduction in St. Kitts and Nevis. The Force also began phasing out the use of paper incident forms through the use of the Crime Management System (CMS) software. Both the PRMIS and CMS will assist the Federationâs transition from a paper-based data collection process to a digitized system

The initiatives require that all members of the force are computer literate — Police Officers, Traffic Wardens and civilians. As a result, it became a part of the mandate of the Force Personnel Office, which oversees training, to ensure that all users of the platforms are able to use it effectively

“It cannot be refuted that continuous computer training is the key to a successful Royal St. Christopher and Nevis Police Force. The employee who receives the necessary training is able to perform their tasks more effectively and in our push to transition to a more efficient data collection system, having computer skills become even more important,” Force Personnel Officer, Clifford Govia, said.”This will inevitably benefit the Royal St. Christopher and Nevis Police Force and the rest of the community. It is critically important that they are able to navigate the software properly and enter the information accurately. The collection and assessment of data are now the centre pieces that are used to prevent and solve crime. It is a necessary part of proactive policing and policing in the 21st century.”